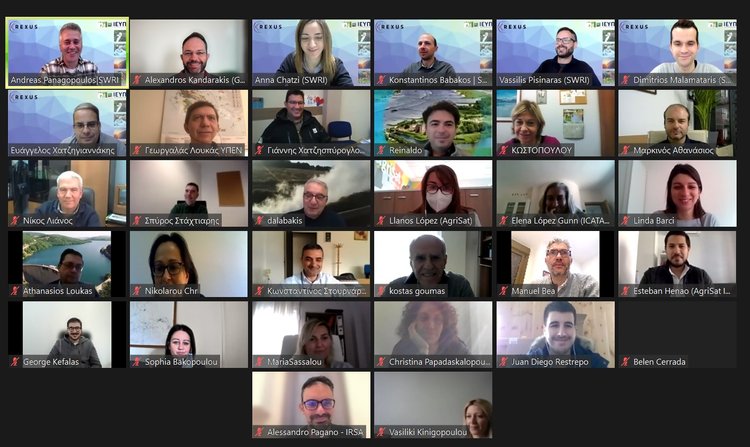 The REXUS Horizon 2020 project’s 1st participatory public meeting of the Pinios river basin – Thessaly pilot program: Scientific Knowledge and Action Forum (LAA kick-off) took place on November 30th 2021, with more than 60 participants, covering a wide spectrum of stakeholders representing key bodies and all NEXUS sectors. They shared the sectoral needs and challenges, the interconnections between them and the key-factors that will play a determinant role in finding and implementing holistic solutions.

The online meeting was organized by SWRI with the valuable contribution of the project’s partners and was supported by simultaneous interpretation to facilitate ease of communication, thus lifting language barriers.

Participants were welcomed by the SWRI team and addressed by representatives of the Directorate General of Research – Hellenic Agricultural Organization and the Regional Authority of Thessaly. Participants were guided to the world of the REXUS project, were offered a thorough explanation of the key terms related to Nexus management, the project’s timeline, the role of the stakeholders and the benefits of their engagement. The pilot area’s key problems and challenges as assessed by the pilot’s research team were analyzed as a kick-off working hypothesis to the stakeholders’ engagement process. The key stakeholders’ pilot group was presented to the attendees and enlarged thanks to their contribution, to make it more representative of the involved sectors at every level, thus giving it a loud voice!

Following this prelude, a set of fruitful and enlightening sessions took place in the form of targeted crowd sourcing polls that triggered round table discussions, where the stakeholders were given the leading role, contributing to a live mapping of sectoral needs, problems and interlinkages tracing and constraints identification.

Here are some of the highlights of the meeting:

•        Most attending stakeholders are involved with the water sector, followed by Agricultural production/Land.

•        The large majority of the stakeholders (85%) acknowledge the need for equity in addressing the sectors, especially within the context of climate change.

•        Most stakeholders participate with the aim to contribute to the co-development of solutions.

Key points concerning the current situation in the Pinios pilot

•        Almost 90% acknowledge the complexity of Nexus management in the basin.

•        Half of the participants indicated that the water sector experiences the most severe challenges, followed by environment/ecosystems (climate).

•        44% and 41% indicated that water and environment/ecosystems (climate) sectors present the highest complexity, respectively.

•        Water is the number one priority for regional development. Agricultural production/Land, environment/ecosystems (climate) and energy follow.

•        Agricultural production / land was identified as the sector that has been mostly investigated/studied, followed by water.

•        Setting up appropriate indicators is a prerequisite to quantification of the identified issues.

•        56% of the participants indicated that sectoral management practices are considering other sectors in a moderate degree. 39% from low to very low.

•        Half of the participants identify strong links between the Water and Agricultural production/Land sectors.

•        50% of the participants answered that the efficiency of applied management practices is low or very low.

•        Influence of groups of interest has been identified as the major factor for the selection of management practices.

•        94% of the participants believe that their sector will be highly to very highly impacted by climate change.

•        Most cross-sectoral connections were identified to occur between water and environment/ecosystems (climate).

A striking percentage of the stakeholders clearly acknowledge the complexity of the Water-Energy-Food-Ecosystems-Climate Nexus and the imperative to address all sectors on an equal basis to define solutions that are viable and promote resilience. However, they strongly feel that Nexus perception is absent in the existing management plans that are strongly influenced by behind-the-scenes lobbying, lacking scientific justification and societal consent.

Although the region of Thessaly has been the object of more studies on water resources than anywhere else in Greece, it still remains amongst the region that faces the most acute issues of availability of usable water.

·       “The conomy and the environment are two sides of the same coin, end-users know that and they ‘suffer’ from it. Nowadays, the natural resources demands in Thessaly are indeed huge, but at the same time natural resources management is not rational and the subsequent degradation of ecosystems has already affected them.”

·       “Over 70% of water demands in Thessaly are covered from aquifers, but huge volumes are also pumped from Pinios river. This condition creates considerable issues in their ecological condition during summertime.”

·       “Detailed investigation of aquifer hydrodynamics is missing to compile reliable water budgets on an annual basis.”

·       “Water quality and quantity monitoring lacks consistency due to lack of resources.”

·       “Groundwater resources are being overexploited for many decades and aquifers are being depleted. This exacerbates water availability issues and significantly raises energy expenses, as water needs to be pumped from great depths.”

Our appointment with the stakeholders is renewed for the upcoming structured interviews, to be followed by our first open workshop in spring.

We are thrilled to work on an intriguing pilot, with passionate and knowledgeable stakeholders, as well as highly qualified, well-established and committed partners, to address a challenging problem: the progress from Nexus thinking to Nexus doing. A big stake for Greece, for Europe and beyond!